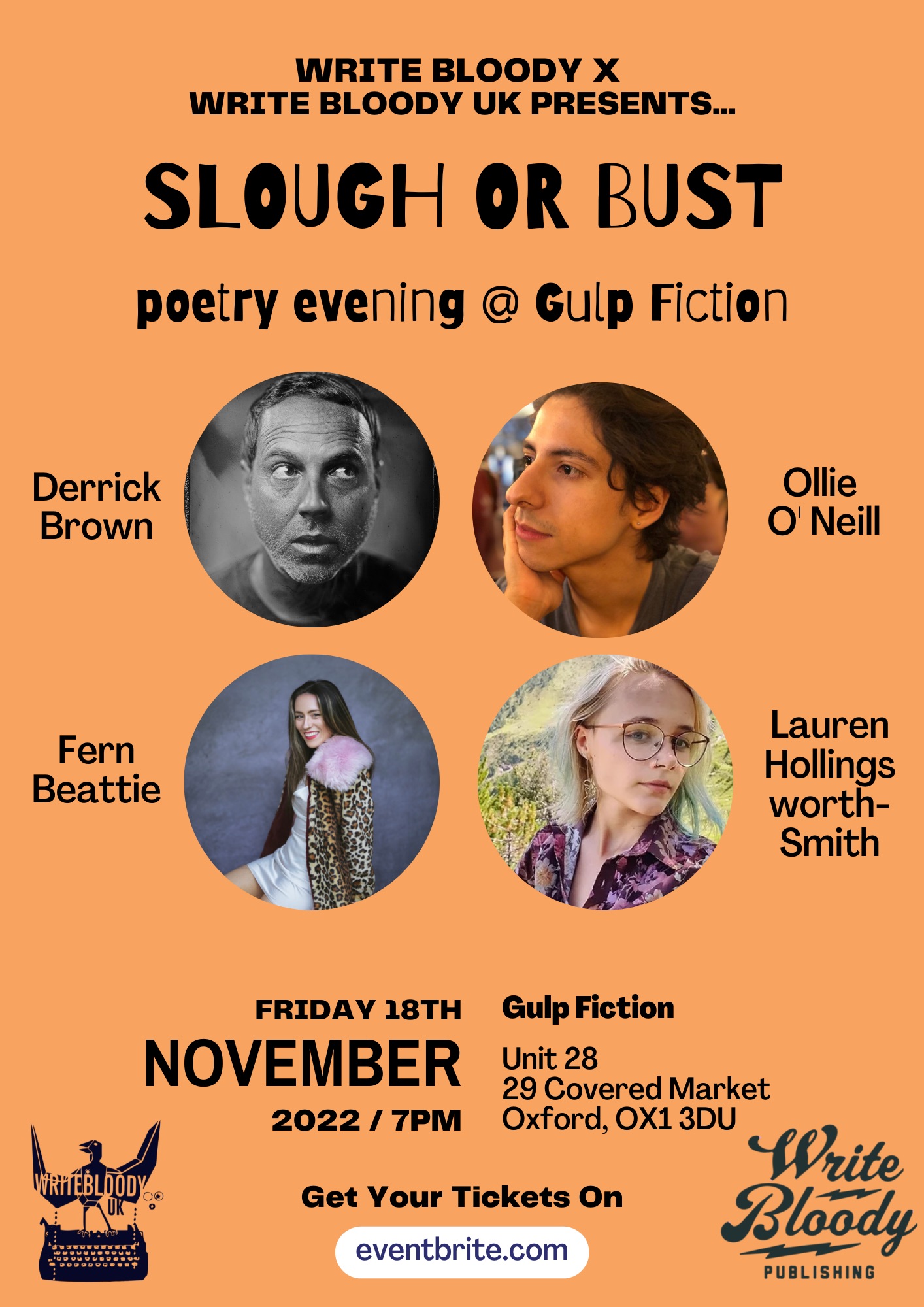 An evening of poetry & drinks at Gulp Fiction bookshop in Oxford with Oliver Sedano-Jones he reads from his newly released collection The Cardboard Sublime, plus LA poet and founder of Write Bloody, Derrick Brown.Keep Your Little Lights Alive (Poems After Kate Bush’s Hounds of Love and Others).

Oliver is a British-Peruvian writer. His work is published in Banshee, Tears in the Fence, Ink Sweat and Tears, SPOONFEED and Prototype. Oliver was shortlisted for the Yeats Prize in 2018, the University of Hertfordshire Single Poem Prize in 2019 and the Wales Poetry Award 2020. His debut collection will be published with us in 2022.

After years of threats, this awkward debut establishes Oliver Sedano-Jones as a middling talent with niche appeal. Turning its tryhard eyes towards themes of disillusionment and bitterness, this collection emerges like a swarm of bats gathering under an electric storm; a prelude to their famous waltz of fangs.

The Cardboard Sublime examines the thinness of epiphany and the transience of catharsis. Fool’s gold & zirconia, ennui and its fantastical antidote.

Derrick C. Brown is a novelist, comedian, poet, and storyteller. He is the winner of the 2013 Texas Book of The Year award for Poetry. He is a former paratrooper for the 82nd Airborne. He is the owner and president of Write Bloody Publishing, which Forbes and Filter Magazine call “…one of the best independent poetry presses in the country.” He is the author of eight books of poetry, including the most recent How the Body Works the Dark, and four children’s books. The New York Times calls his work “…a rekindling of faith in the weird, hilarious, shocking, beautiful power of words.”

Signed books will be available at the event.

Lauren Hollingsworth-Smith is a poet and artist based in Rotherham and Oxford. She is a member of The Writing Squad and Hive’s Poetry Collective. Lauren’s work has been published in several anthologies including She Will Soar (Pan Macmillan 2020). Her debut pamphlet Ugly Bird won the 2020 New Poets Prize. She won the Foyle Young Poets of the Year award in 2019 and was highly commended in the Young Northern Writers’ award. Lauren has performed at various events and festivals, including Ledbury Poetry Festival, Kendal Poetry Festival and Off the Shelf Festival of Words. She studies English and French at Oxford University.

At times gut wrenching, at times ecstatic and defiant, Look How Alive I Am is filled with vibrant poems, pulsing with the joy and the pain of living. Navigating love and loss, battles with depression, Alpine landscapes and buzzing cityscapes, Hollingsworth-Smith’s debut book has a heartbeat.

Fern is the founder of Write Bloody UK. She writes mainly about what she considers her personal Four Horsemen of the Apocalypse: Women, Love, Sex & Death. Fern has released three poetry collections, The Trouble With Love (Lapwing), Pendulum and The Art of Shutting Up (Broken Sleep Books). Her writing has been published on Your Friend’s House, as well as in Belleville Park Pages, The Legendary, JUNGTFAK and Blood Tree Literature. In 2017, her spoken word piece for the short dance film Shaping Scars was officially selected for LA Dance Short Film Festival, TIFF, Korea Film Festival, L Fest & Flatlands Dance Film Festival. She is the First Prize winner of this year’s Kent & Sussex Poetry Competition with her poem “I Still Dream About My Ex-Lovers.”